Why your next private jet flight might be on a turboprop

Why your next private jet flight might be on a turboprop 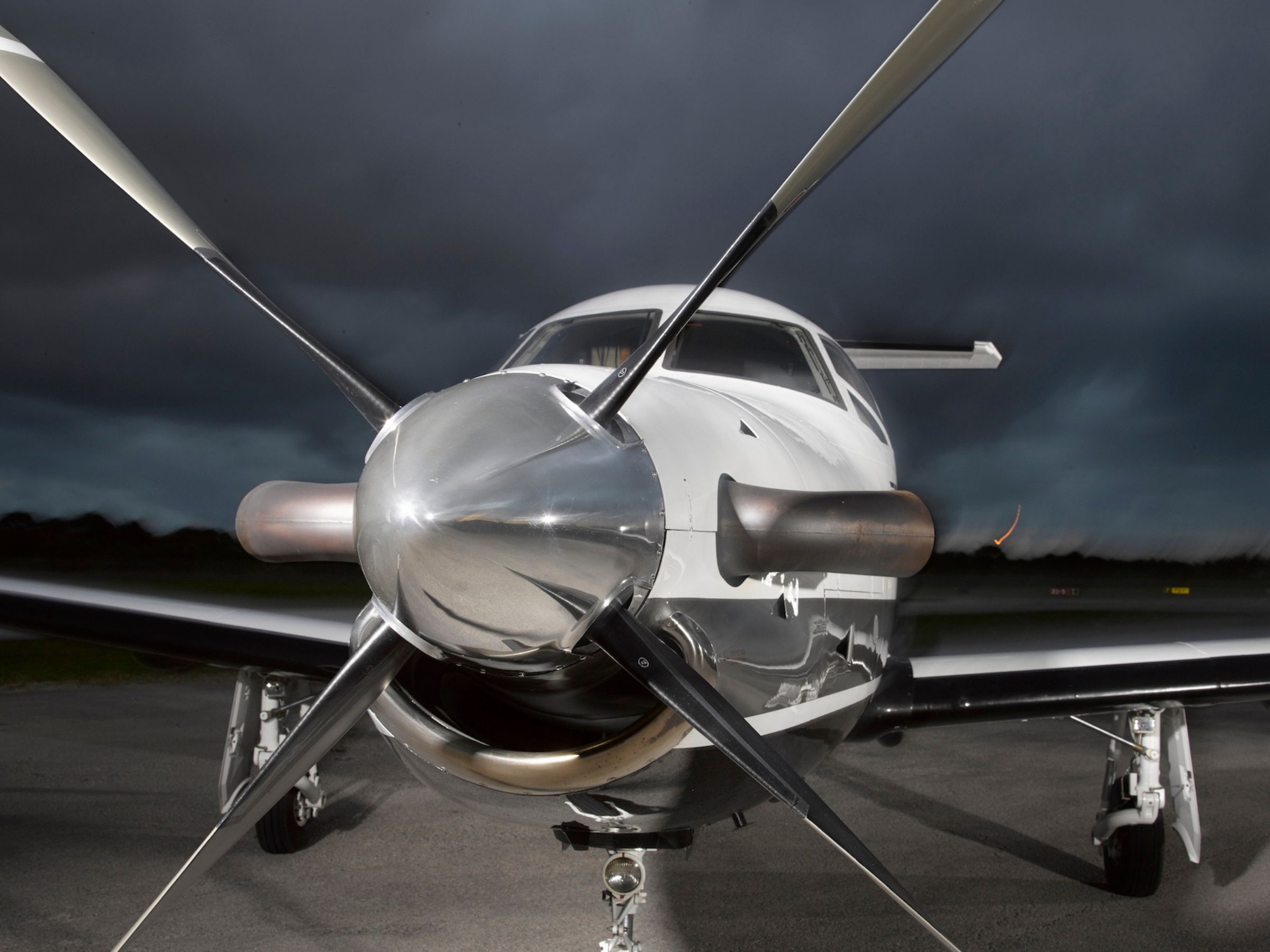 Often overlooked, Turboprops offer a genuine alternative to a light jet charter. Incorrectly perceived as old-fashioned, the turboprop is in fact a more recent invention than the jet engine, and makes for a more fuel efficient alternative on short-haul routes.

Essentially a jet engine powering a propeller, the turboprop delivers power faster, enjoys lower operating costs and offers greater versatility without compromising on luxury, especially where smaller airfields are the only option (even grass or other unmade surfaces in some cases).

And with modern turbo-props like the King Air or PC-12 passengers feel no difference compared to a jet once inside. Once you experience the King Air, PC-12 or some of the other modern turboprops passengers are always astonished about how quiet, smooth and comfortable they are. There is even a fully enclosed lavatory, something smaller jets don’t always have.

What, exactly, is a turboprop?

In technical terms, it all boils down to the type of engine that powers the aircraft. In a turboprop (short for turbo propeller) engine, the gases produced by the output of the turbine engine drive a propeller, which in turn generates the aircraft’s power. Whereas if it has a jet engine, the exhaust gases generate a direct power called ‘thrust’.

Visually you can see the difference if you look at them side-by-side on a runway: The turboprop will have obvious propellers on the outside of the aircraft, whereas a jet will not.

In general a turbo-prop aircraft can carry up to eight passengers and six golf bags. Very light jets seat as few as four passengers and light jets typically hold six to seven passengers, whereas midsize jets will generally range from seven to nine seats, meaning that when costing shorter flights for larger groups the true jet alternatives generally run $6,000 to $10,000 per hour where a PC-12 would do the trick for about a third of the cost.

It’s not just price access is also an advantage for props. Often a turbo-prop can get you closer to where you want to go, because it can access smaller airports that eight-passenger jets cannot, which ultimately saves time. It means that a turboprop can take you places a jet cannot, specifically various destinations in the Caribbean. So if you’re looking to take a trip to the Caribbean from Boca Raton, Florida, then a turboprop is perfect for you.

The maximum takeoff weight in a turboprop is typically greater than that of a light jet, allowing more room for specialized equipment such as skis, golf clubs, or hunting gear.

Though there is some mythology around turboprops not being as safe as private jets, rest assured both turboprop planes and private jets have turbine engines, meaning their operation is virtually the same. Still one of the most common concerns people have when traveling on an aircraft with propellers is that it lacks the safety of a jet without propellers. Perhaps the concern is related to the sight of a propeller on an engine renders a perception of an amateur or more antiquated aircraft?

Turboprops are also fit to land in less-than-ideal conditions such as dirt or grass runways. Therefore, if an emergency landing were to be required, a turboprop has more options.

Best tip? Use a reputable operator that do not compromise on safety or regulatory compliance. At Privaira we are proud of our ARGUS Platinum-rated safety record and IS-BAO Stage II certification.

The PC-12 was designed for short-grass and gravel landing strips. This has made it an extremely practicable aircraft, highly valued the world over for its utility. A feature usually reserved for heavy jets, its large rear cargo door and huge cargo compartment (accessible in-flight) add to that sense of utility; and as an embodiment of its Swiss-made origins, the cabin’s comfort levels and generous size make it a truly versatile choice.

This Swiss-built turboprop has fantastic performance, versatility and flexibility, and an interior to rival luxury super-light jets in both size and comfort. Built to navigate the mountains, this is the aircraft to choose for seamless access into hard-to-reach locations.

The cessna caravan is known for its rugged utility and flexibility. With its powerful turboprop engine, the Caravan aircraft delivers the rare combination of high performance, low operating costs and ability to adapt to a wide variety of missions.

The dispatch reliability of the Executive Caravan 208 models is unparalleled: a remarkable 99%+ rate. Each Caravan model has exceptional payload capabilities. Factor in the inherent versatility, configurability and sheer ruggedness of the Caravan, and the applications become virtually limitless.

PRIVAIRA will provide you with the private jet service you deserve. Call or us directly at 844.778.2472 or ask for a quote here.